Being a big fan of Jon Rafman and exploring Google street view as a form of art. I decided to dig a little deeper and see who else is using Google Maps for creating Art works. I came across a video for Lux Repeat’s track “Avoiding You”, created almost entirely in Google Earth by artist Bartholomäus Traubeck. The work takes you soaring over a glitchy landscape with occasional target-like shapes bombarding the screen. The somewhat anxiety-inducing sounds combined with the muted aesthetics and centrally-located geometric shapes makes you feel like a cyber-fighter pilot cruising over Google Earth's landscape. The glitchy landscapes jitter along as if under the watchful gaze of some omnipresent being, reinforced by the shots of the starry night sky panning back to terra firma. It’s like you’re caught inside an astral dream, as abstract geometric forms and changing polygonal landscapes drift past to a soundtrack of minimalist techno. It’s an unnerving and slightly jilting experience, transforming the earth’s terrain into an otherworldly digital journey.

I kept dropping Pegman on green parts of the map (green representing nature) and screen capture the result.

Pegman in Nature sits precisely within this fragmented landscape of images, maps, nature, media processes, and cultural reconfigurations – presenting, representing and expanding the concept of a media-flânerie in constant becoming.

Rhetoric seems not so much concerned with play as an intellectual contest or a competitive bout, rather play is represented as ways of thinking about a culture to be interpreted (Sutton-smith, 1997). I see Pegman in Nature a commentary on the false representation of nature depicted by companies such as Disney.

Pegman in Nature depicts the real, the beautiful and sometimes ugly, messy dirty nature, as pegman didn’t always land in beautiful natural surroundings. It sometimes landed in the middle of a studio apartment or on a busy street, or a dry river. It shows the lack of nature, it shows the abundance of it. There is no romanticising of nature in this work which is something that I wanted to slightly hint at. 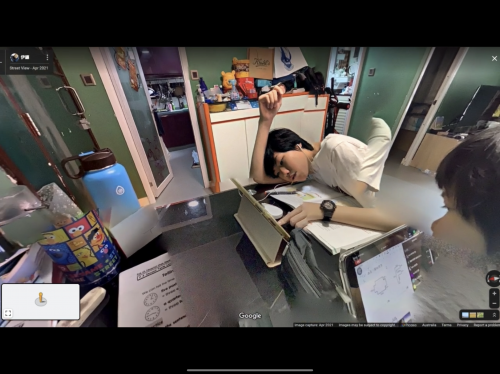