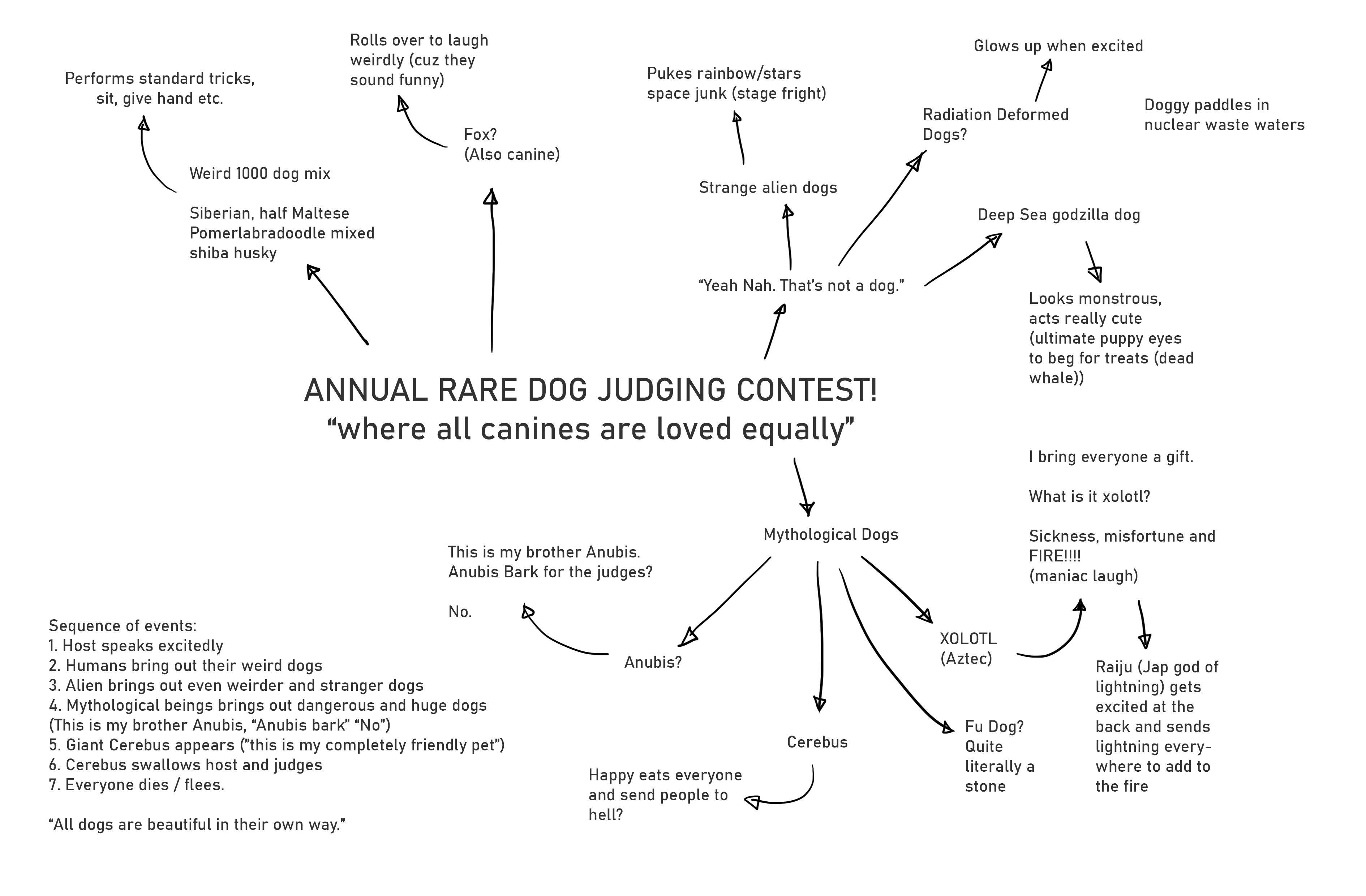 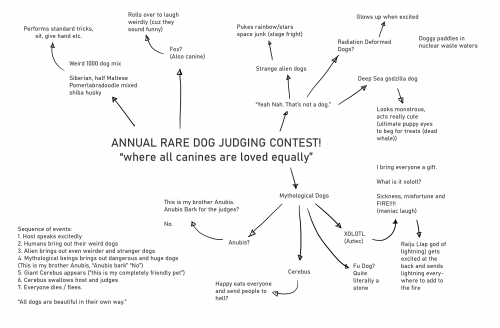 This week we got around to making mind maps for a potential idea for the upcoming project. The stolen dialogue of ‘Yeah Nah, that’s not a dog’ enchanted me. I wondered how far fetch and ridiculous could the concept be to deliver such a quote. Foxes were the first that came to mind, they are canines yet are rarely recognised as ‘dogs’. I was excited by the ridiculous creatures that I can create and labelled by ‘dogs’. Flooded with strange alien abominations, I decided to showcase all these strange species in an ‘Intergalatic-national-dimensional Dog Judging contest’. This is planned to be an animation that starts off with somewhat regular dogs, and more bizarre and dangerous dogs as the animatic goes on.

By choosing animation as a medium, I hope to combine my learnings from the past few weeks, consolidating the use of body language, expression, event sequence and dialogue to form an (potentially complete) animation. The animation will also allow me to showcase the ‘dogs’ in a dynamic manner, portraying personality traits through body language (performing and walk cycles), interactions with trainers (dangerous or cute). I am also able to freely play with perspective and camera angles of shots, which I have yet to experiment with in my works.

My work is inspired by that of Jjaltoon (JJALTOON English on Youtube) and Cyanide & Happiness (ExplosmEntertainment on Youtube). Jjaltoon is a South Korean based animator and comic artist known for the very simple yet ‘ugly’ animations. Most animations feature big eyed and beautifully rendered characters (disney, pixar), but Jjaltoon focused otherwise. They dramaticized every emotion of the characters, twisting their expressions to maximize their impacts. They weren’t focused on beauty and aesthetics, but conveying strong emotions with the smallest amount of resources possible. This style may be appropriate for my animation, as they are both overly dramatic in the telling of simple events. Cyanide & Happiness are a series of webcomics / animated shorts with a dark, dramatic and surreal sense of humour. These animatics often start in a normal and peaceful tone and often end with a dark twist (violence etc). I would like to feature this manner of progression in my work, starting off with normal dog showcases and progressively moves onto more violent and chaotic ‘dogs’, ending in fire and despair as the hellhound cerberus devours the judges.

I started with a mind map to first collect my thoughts, listing down any ideas that I had on the potential dog species and how they may behave. After this was complete, the ideas were reorganised into a sequence of events that my animation will follow. Again, starting off mellow and escalated quickly into chaos.